Of course on our banner we do not have time to go into the dozens of reasons Americans deserve and should demand a new investigation.

Five of us patriotic American freeway bloggers from the Sacramento / Davis area showed up at 8:00 on the morning of September 11, 2011.  This was a great way to take action in memory of 9/11 and the ongoing wars and deception that is being carried out in the name of 9/11.

Our video of the event is

The rate of flow of traffic varied from 40 cars per minute eastbound early, like up until 10:00, to 80 cars per minute westbound after 10:00.  Assuming an average rate of 60 cars per minute and 3 1/2 hours or about 200 minutes of freeway blogging that is 12,000 people who were able to clearly see our sign “Investigate 9-11”.  That was facing the westbound traffic.  Some of the eastbound traffic could see the other side of our sign that said, “9/11 was Created by US Gov to Manipulate US Into War”.  Overall we reached at least 12,000 people today.  Many people honked.  We always assume they honk because they agree with us.  There were a few brainwashed victims of the corporatocracy’s propaganda but we do not worry about them.

We arranged this event, as we have arranged the last 5 freeway blogging events in Davis, in cooperation with the Woodland CHP.  Thursday I called to notify them of the date, time and place our peaceful demonstration and asked that CHP notify its officers, dispatcher, and the Davis P.D. as they had done the last 5 times we went out (last April, June, September, October and November).  They did.  We had a brief conversation with Ofcr. Benson of the Davis P.D. toward the end that ended without conflict.  We thank the CHP and Davis P.D. for their cooperation and understanding in allowing our Constitutionally protected peaceful demonstration and exercise of free speech to take place without incident. 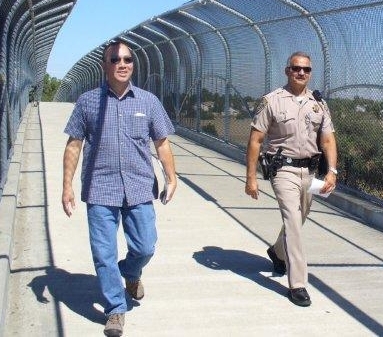